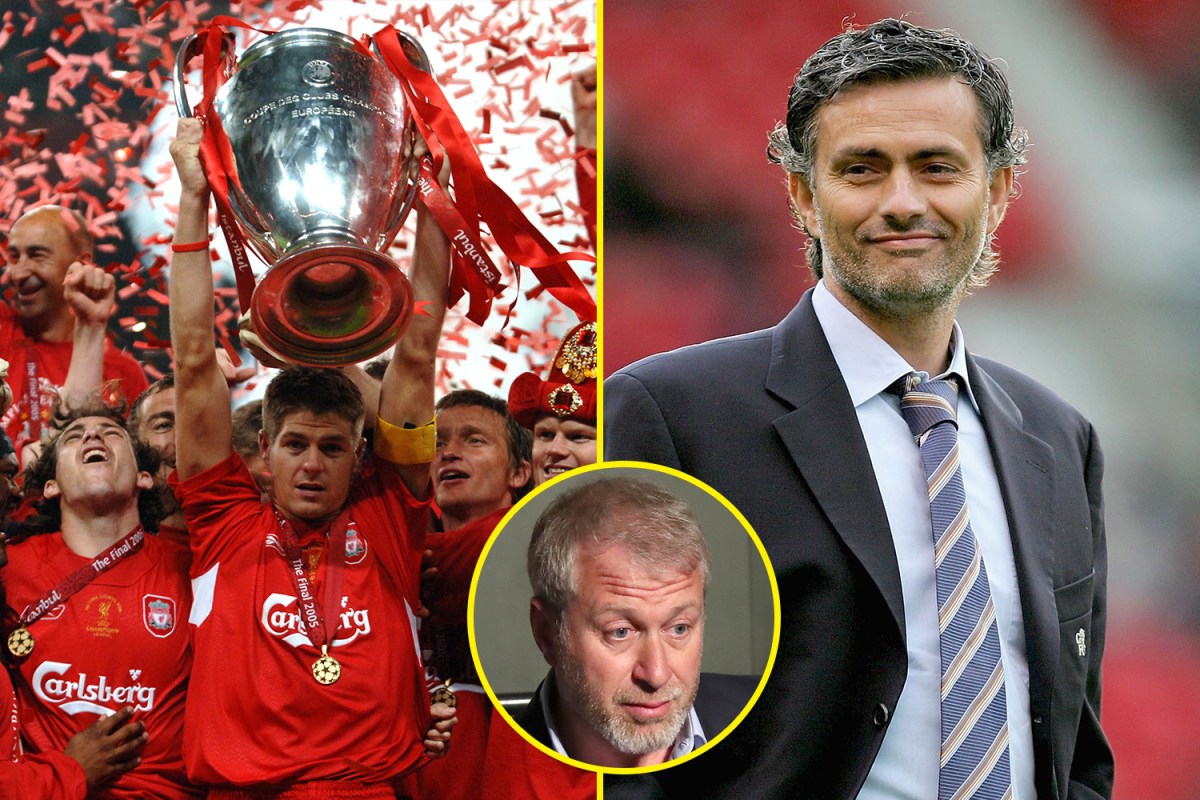 Steven Gerrard renews his long history with Chelsea on Boxing Day – live on talkSPORT – this time as manager of Aston Villa.

While at Inter and Real Madrid he tried his hardest to snag one of Anfield’s most famous sons, but his most outrageous attempt was in 2005, while at Stamford Bridge.

Riding high on the back of their miraculous Champions League final win over Milan in Istanbul, things were surely only about to get better on Merseyside.

But, less than two months later, Gerrard, one of the most inspirational figures on that night in Turkey, was the subject of a £32million bid from their Premier League rivals.

Gerrard, then 25, was ready to commit to his boyhood club and right after lifting the Champions League trophy told reporters: “How can I think of leaving Liverpool after a night like this?

“I am really happy with the club. I will be having talks with the chairman and the manager shortly, but it is looking good.”

But as Liverpool returned to training just 33 days after the triumph – because they had to qualify for the competition they had just won – Chelsea loomed on the horizon, as they had done a year earlier.

In 2004, the Blues first registered their interest and it had been claimed that Rafa Benitez told a leading European football agent he now had money to spend after selling the midfielder.

Meanwhile, Mourinho commented on speculation by telling reporters: “The only thing I can say is if he comes I will welcome him with open arms.”

A £20million deal did not go through, though, despite Gerrard telling Mourinho and Blues chief executive Peter Kenyon he would sign.

Gerrard opted to stay, fearing he would tarnish his reputation on Merseyside, despite the club finishing 30 points off top spot in 2003/04.

Even at Euro 2004, England Chelsea stars like John Terry spoke to him about a possible switch.

He said: “Mourinho expressed his interest to the England players (at Chelsea) — 100 per cent he would have made us stronger — and asked if we could have a quiet word with Stevie, which we did. Stevie literally said from day one he didn’t want to go but in the end, he got kind of turned.”

Looking back on it all, former Liverpool chief executive Rick Parry quipped: “I think during the Euros, Steven pretty much decided he wanted to go to Chelsea. The mistake Chelsea made was letting Steven come back to Liverpool after the Euros.

“They should have kept him on Abramovich’s boat.”

Some claimed death threats nudged him towards staying, but even when the two sides played each other in the 2005 League Cup final, which Mourinho’s men won partially down to a Gerrard own goal, there were rumours of a new bid.

The fact it dragged on for a year is a regret Gerrard has, one he puts down to his immaturity at the time.

He even hinted at a possible move mid-season when they looked on the cusp of being knocked out of the Champions League.

Ahead of his famous match against Olympiakos, he said: “If things aren’t looking good, I’ll have to see what happens in the summer.

“I’m 25 at the end of the season and I’ve got six or seven years left in me at the top level to win things, so hopefully the turnaround can happen quite sharpish.

“I’m in a difficult situation because I’m a fan myself. I want to win things at this football club but I haven’t got time on my side. I can’t really wait three or four years for the club to be turned around and to be made into a title-winning side. I’m hoping that will happen from now until the end of the season and that, come the summer, we’ll be in next year’s title race. I’m not giving up now but look at the table.”

Liverpool ended the 2004/05 campaign in fifth position in the Premier League, a huge 37 points behind Chelsea – it’s no wonder Gerrard thought again.

An unfortunate and seemingly accidental stand-off between all parties as the Reds looked to get Gerrard signed on a new deal occurred.

Mourinho spoke about dreaming of a midfield trio of Claude Makelele, Frank Lampard, and Gerrard but it was Real Madrid who led the race come the start of July.

By July 4, contract talks with Liverpool had gone belly up and Parry was mystified by comments from Gerrard’s agent who said they were ‘unlikely to be re-opened’, despite the club offering a club-record £100,000 a week.

A day later, they had rejected a £32m bid from Chelsea but, most harrowingly of all, Gerrard had handed in a transfer request.

“Sadly, Steven has told us this afternoon that he will not accept our offer of an improved and extended contract because he wants to leave Liverpool,” said a Reds statement.

Gerrard would say in a statement of his own: “This has been the hardest decision I have ever had to make.

“I fully intended to sign a new contract after the Champions League final, but the events of the past five to six weeks have changed all that.”

The power of family and phone calls are well known and eventually, barely 24 hours later, a U-turn had been performed.

Liverpool apologised for misunderstanding how Gerrard had wanted contract talks to be undertaken.

He signed his new deal on July 6, still £50,000 a week less than what he’d have been on at Real Madrid, while offering his resignation as captain for his conduct during the process – Benitez rejected it immediately.

“It would have broken my heart to have lost the captaincy but I thought it was right to make the offer,” Gerrard said.

The Liverpool fans needed to be won back and during the talk a ‘Gerrard 17’ shirt had been burned outside Anfield, while a banner with the name ‘Judas’ was hung at Melwood and ‘Traitor’ was spray painted on the walls of the club’s Melwood training ground.

A week later he played at Anfield in the Champions League, scoring a hat-trick – his first for the club – in a 3-0 first leg win against Welsh side Total Network Solutions and the supporters in the stands bellowed his name.

He netted two more in the return fixture, setting the scene for an incredible campaign which saw them finish third in the Premier League and win a dramatic FA Cup final against West Ham with Gerrard the hero at the Millennium Stadium.

All was forgiven and he would play out all but the final season-and-a-half of his career at Anfield.

When he managed against Gerrard for a final time in 2015, Mourinho revealed the midfielder was his ‘one who got away’ but admired the player’s loyalty, which created an inspiring legacy.

“I’m very happy that he didn’t [join] because, in the end, I think it was an amazing career and [he had an] amazing feeling with his people, that he refused to play for other big clubs, he refused to play in other big leagues to play only for Liverpool. And I think this is a feeling that stays forever.

“Who knows, I might play against Steven as a Liverpool manager one day.”

Currently he’s in charge at Aston Villa and he could land another blow on Chelsea’s title hopes this Christmas.

Aston Villa vs Chelsea is live and exclusive on Boxing Day with talkSPORT bringing you coverage at Villa Park from 5.30pm

SOURCE: Football – news, transfers, fixtures, scores, pictures   (go to source)
AUTHOR:
Anton Stanley
All copyrights for this article, including images, are reserved to the original source and/or creator(s).