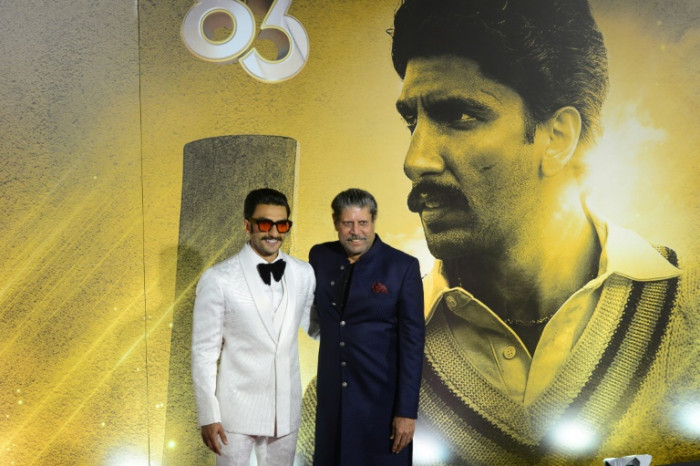 MUMBAI – Bollywood’s retelling of the 1983 World Cup hits cinemas Friday, recalling a stunning underdog victory that was instrumental in turning India into the cricket-crazy nation it is today.

Captained by Kapil Dev, seen now as one of cricket’s best ever players, India began the tournament in England as rank outsiders but ended up triumphing over the all-conquering West Indies in the final at a raucous Lord’s.

The victory “was the turning point of how we saw ourselves as a cricketing nation, and… that incredible win fed into the veins of a country that till then had seen itself as also-rans on and off the cricket field,” the Indian Express daily said ahead of the release of “83”.

“The next morning, banner headlines screamed ‘The Cup Is Ours’, and nothing was ever the same. It was a blood rush to beat all blood rushes,” the paper said.

The first sign that India meant business was in the group stage of the tournament when Dev made 175 not out — with India having been on the ropes at 17 for 5 — against Zimbabwe.

A BBC strike on the day meant it was not filmed but hallowed cricketing almanac Wisden called it “one of the most spectacular innings played in this form of cricket”.

An easy semi-final victory over a fancied England side — featuring greats like Ian Botham, David Gower and Bob Willis — then set up the grand final against the West Indies, the defending champions.

But India cruised to victory, causing pandemonium in the Lord’s stands and back home.

Dev is played in “83” by Ranveer Singh, the Bollywood superstar honed his own cricket skills four hours a day for six months to play the role.

In an interview with AFP, Dev said India were helped by being underdogs.

“There were no expectations. All the media’s attention was on Australia, England, West Indies, and all the pressure was on the other teams,” the 62-year-old said.

“There was no pressure on us, so we were enjoying ourselves… I think half way through we all started believing we are good enough to win the World Cup, and that’s when the change took place.”

Veteran journalist Ayaz Memon, who covered the tournament, said that cricket was already popular and that India had won a Test series in England in 1971 for the first time.

“But it was the sheer unexpectedness of the triumph. Who had thought that India would beat the world champions? It triggered so much passion and so much interest in the game in India that it was never the same again,” Memon told AFP.

The victory also revealed the commercial opportunities of cricket in India, paving the way for the money-spinning spectacle it is now.

This was also driven by the opening up of the economy and the advent of cable television in the 1990s.

“It (the win) completely transformed the future not just of Indian cricket but also cricket as a sport internationally. After that India became in a sense the epicentre of the cricketing world,” Memon said.

Kabir Khan, who directed the new movie — heavy on the drama, with the obligatory dash of song — admits taking some “creative liberties” but advice from some of the original players kept him broadly true to what happened.

“I had the ultimate luxury of making a film on a historic event where the players are still around to tell me how it happened,” Khan told AFP.

SOURCE: Bangkokpost.com : Sports   (go to source)
AUTHOR:
AFP
All copyrights for this article, including images, are reserved to the original source and/or creator(s).

Sitting On A Beach Earning 20%

We were brilliant, says Guardiola despite end of Man City’s winning run