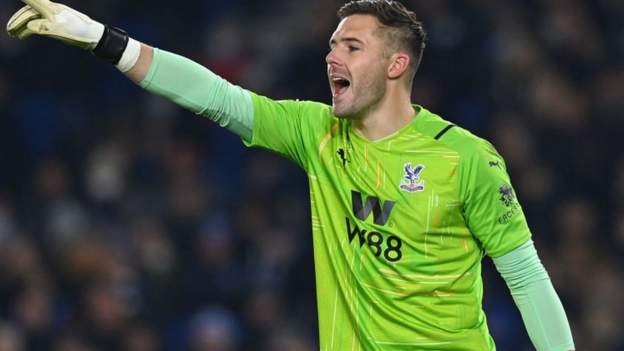 Jack Butland “allowed us to go home with the point” said Crystal Palace manager Patrick Vieira after his keeper’s fine performance helped them draw 1-1 with Brighton.

Butland saved a penalty from Pascal Gross and made several key saves in the stalemate at the Amex Stadium.

It comes less than a week after Butland’s howler gifted Benik Afobe a goal for Millwall in Palace’s 2-1 FA Cup victory.

“Jack Butland was the man of the match, I am delighted for him. He is working hard every single day,” said Vieira.

“He needed a chance and he was at his best today. He showed all his potential. He deserved it for the way he has been working and waiting.”

Palace looked set to take all three points after Conor Gallagher scored in the 69th minute, before a late own goal from Joachim Andersen capped off an eventful encounter.

Brighton were the better side throughout and, before Gallagher’s composed finish from Jeffrey Schlupp’s cut-back, they had tested Butland on a number of occasions.

Butland denied Gross from the spot in the first half, kept out Leandro Trossard following a huge error from defender Joel Ward and later tipped Jakub Moder’s effort over the bar.

Brighton’s Moder also hit the crossbar within minutes of the restart after Neal Maupay had earlier bundled a finish over the line, only for the goal to be ruled out for a foul on Butland.

In a frenetic few minutes before half time, Jones awarded the spot-kick when Will Hughes had his arms around Joel Veltman but Gross’ poor attempt was saved. From the resulting corner, Maupay had a high boot as he challenged Butland’s grip on the ball on the goalline.

With three minutes left, Maupay’s low cross was eventually deflected in by Andersen to seal the 1-1 draw.

But despite not coming away with a clean sheet, it was a pleasing night for Butland, who said his performance was “rewarding” and a reminder of his talent.

The 28-year-old, understudy to Jordan Pickford for England at the 2018 World Cup, lost his number one spot at Stoke before moving to Palace.

This was just his fourth Premier League start for the club and Butland said: “I left Stoke and had been struggling confidence wise. Coming to Palace is a breath of fresh air.

“The chances have been few and far between and to have a night like this is rewarding and reminds me what I am capable of.

“There are still things to work on but it has been a long time, when you don’t play as regularly as you like it is harder. This is a reminder. I feel like I have been ready for this.”

There had been a decisive 90th-minute goal in the previous three league encounters between these two rivals so it was inevitable late drama would feature again.

Brighton had done everything but score when Gallagher sent the away end wild with a cool finish against the run of play.

Palace had rarely troubled keeper Robert Sanchez – his best save was to deny team-mate Adam Webster who sent a deflection towards goal under pressure from Odsonne Edouard at the near post.

But Brighton, typically, did not give up and continued to put pressure on the visitors, eventually reaping the rewards when Maupay’s low cross was flicked in by the unfortunate Andersen.

Manager Graham Potter had looked distraught when Gallagher scored for Palace, but he had clenched fists and a look of relief when his side hit back with time running out.

Player of the match

Luka Milivojevic (Crystal Palace) wins a free kick in the defensive half.

Attempt blocked. Solly March (Brighton and Hove Albion) left footed shot from the right side of the box is blocked. Assisted by Tariq Lamptey.

Attempt missed. Danny Welbeck (Brighton and Hove Albion) header from the centre of the box is just a bit too high. Assisted by Solly March with a cross.

Attempt missed. Solly March (Brighton and Hove Albion) left footed shot from outside the box is high and wide to the left following a corner.

Marc Cucurella (Brighton and Hove Albion) wins a free kick in the attacking half.

Will Hughes (Crystal Palace) wins a free kick in the defensive half.

Luka Milivojevic (Crystal Palace) wins a free kick in the defensive half.

Attempt missed. Adam Webster (Brighton and Hove Albion) header from the centre of the box misses to the left. Assisted by Alexis Mac Allister with a cross following a corner.

Benjamin Tetteh sent off for punching opponent in the face after full-time whistle of Ghana vs Gabon AFCON match, and he only came on as a last-minute substitute