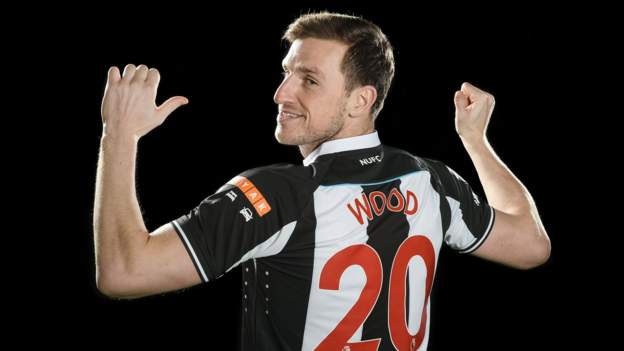 Magpies boss Eddie Howe targeted attacking reinforcements after Callum Wilson was ruled out for eight weeks with a calf injury.

“This is massive opportunity and club, and something I couldn’t turn down,” said Wood.

It had been thought Burnley would not sell the player to a Premier League relegation rival, but Newcastle triggered the release clause in his Clarets contract.

“It wasn’t an easy decision,” said Wood. “I spent four and a half great years [at Burnley]. Every single year I really enjoyed myself there. My team-mates, the staff, the club as a whole was fantastic.

“To be honest, I wish I’d left when Burnley were further up the league, but that’s just how football is sometimes.

“For me, there was no bad blood at all. I enjoyed my time there.”

The Football News Show: How much will Burnley miss Wood?

Wood, who was Burnley’s record signing when he arrived from Leeds for £15m in 2017, scored 53 goals in 165 games for the Clarets, including three in 17 league appearances this season.

The move leaves Burnley boss Sean Dyche with a major problem after losing one of his most experienced forward players.

The Turf Moor side and Newcastle are level on 11 points in 18th and 19th place in the top flight, although Burnley have two games in hand.

“Chris is an important signing for us at a crucial time and I’m very pleased we have been able to move quickly and bring him here,” said Howe.

“He is a very dangerous attacking threat, has a physicality and character that I really like, and he has vast experience in the Premier League. He will be a great fit for us.”

Wood could make his Newcastle debut in Saturday’s home game with Watford, who are two points above the Magpies in 17th.

‘I’ll come back from injury with different mentality’

It’s going to be good to have new bodies in the building, add competition for places. A striker’s coming in the door which is exciting for me – I like it.

I’m going to come back [from injury] with a different mentality, but that’s what you need sometimes. You have to have that little boost to get you going again and keep you on your toes.

With me being out injured, we need players that are Premier League-ready and I don’t think you’re going to get a better striker in the bottom half of the league than Chris Wood.

He’s a different profile than me, so I’m sure the manager has in his plans either to play us together or one at a time. He’ll be a great addition.

Find all the latest football transfers on our dedicated page.

Van der Poel has knee surgery during back injury convalescence