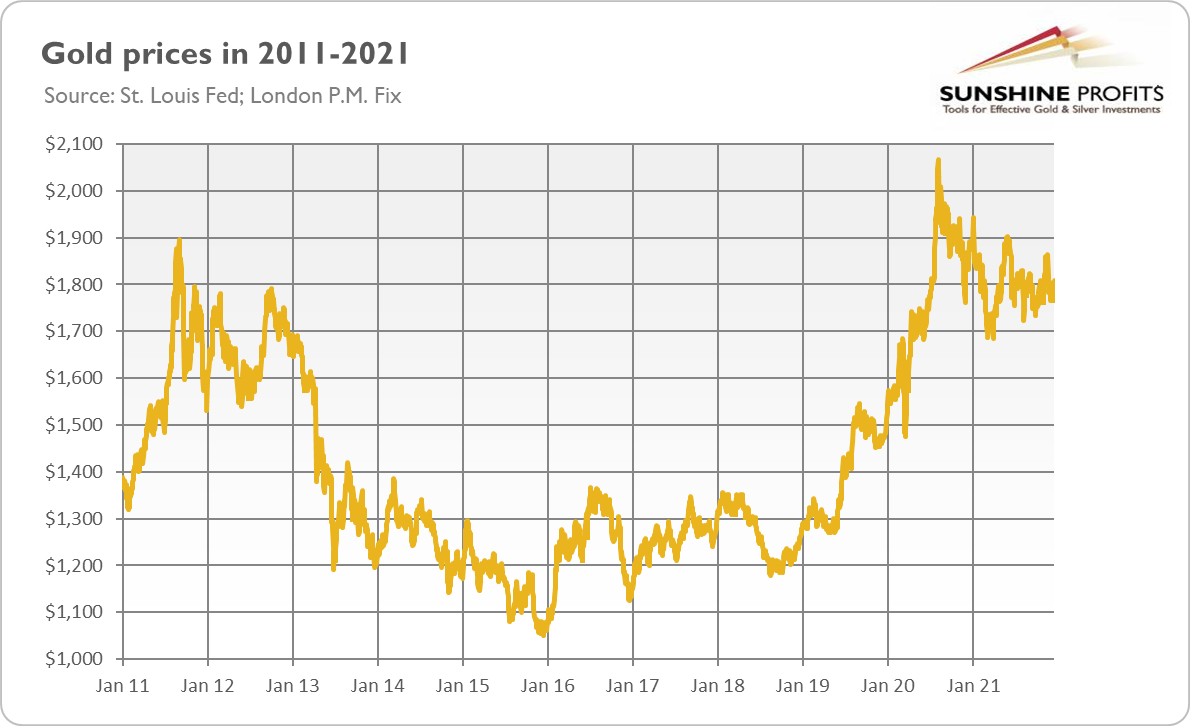 The Republic is crumbling under attacks by the ruthless Supply Lord, Count Shortage. Dearness is everywhere. Will gold save the galaxy? If George Lucas were to make a movie about 2021 instead of Jedi knights, he would probably call it Revenge of the Supply. After all, last year will be remembered as the period of semiconductor shortages, production bottlenecks, disrupted value chains, delayed deliveries, surging job vacancies, rising inflation, and skyrocketing energy prices. It could be a shocking discovery for Keynesian economists, who focus on aggregate demand and believe that there is always slack in the economy, but it turned out that supply matters too!

As a reminder, state governments couldn’t deal with the pandemic more smartly and introduced lockdowns. Then, it turned out – what a surprise! – that the shutdown of the economy, well, shut down the economy, so the Fed and the banking system boosted the money supply, while Congress passed a mammoth fiscal stimulus, including sending checks to just about every American.

After the reopening of the economy, people started to spend all the money that was “printed” and given to them. Hence, demand increased sharply, and supply couldn’t keep up with the boosted spending. In other words, 2021 showed us that one cannot close and reopen the economy without any negative consequences, as the economy doesn’t simply return to the status quo.

It turned out that economic problems are not always related to the demand side that has to be “stimulated.” We’ve also learned that there are supply constraints and that production and delivery don’t always go smoothly. The contemporary economy is truly global, complex, and interconnected – and the proper working of this mechanism depends on the adequate functioning of its zillion elements. Thus, shit happens from time to time. This is why it’s smart to have some gold as portfolio insurance against tail risks.

Evergiven, the ship that blocked the Suez Canal, disrupting international trade, was the perfect illustration. However, the importance of supply factors goes beyond logistics and is related to regulations, taxes, incentives, etc. Instead of calls for injecting liquidity during each crisis, efficiency, reducing the disincentives to work and invest, and unlocking the supply shackles imposed by the government should become the top economic priority.

Another negative surprise for mainstream economists in 2021 was the revenge of inflation. For years, central bankers and analysts have dismissed the threat of inflation, considering it a phenomenon of the past. In the 1970s, the Fed was still learning how to conduct monetary policy. It made a few mistakes but is much smarter today, so stagflation won’t repeat. Additionally, we live in a globalized economy with strong product competition and weak labor unions, so inflation won’t get out of control.

Indeed, inflation was stubbornly low for years, despite all the easy monetary policy, and didn’t want to reach the Fed’s target of 2%, so the US central bank changed its regime to be more flexible and tolerant of inflation. It was in 2020, just one year before the outbreak of inflation. The Fed completely didn’t expect that–which shows the intellectual poverty of this institution–and called it “transitory.”

Initially, inflation was supposed to be short-lived because of the “base effects” and the “supply bottlenecks.” Only in November, the Fed admitted that inflation was more broad-based and would be more persistent than it previously thought. Well, better late than never!

What Does Revenge Of Supply And Inflation imply For Gold Market?

One could expect that gold would perform better last year amid all the supply problems and a surge in inflation. We’ve learned that gold doesn’t always shine during inflationary times. The reason was that supply shortages didn’t translate into a full-blown economic crisis. On the contrary, they were caused by a strong rebound in demand; and they contributed mainly to higher inflation, which strengthened the Fed’s hawkish rhetoric and expectations of higher interest rates, creating downward pressure on gold prices.

On the other hand, we could also say that gold prices were supported by elevated inflation and didn’t drop more thanks to all the supply disruptions and inflationary threats. After all, during the economic expansion of 2011-2015 that followed the Great Recession, gold plunged about 45%, while between the 2020 peak and the end of 2021, the yellow metal lost only about 13%, as the chart below shows.

Hence, the worst might be yet to come. I don’t expect a similarly deep decline as in the past, especially since the Fed’s tightening cycle seems to be mostly priced in, but the real interest rates could normalize somewhat. Thus, I have bad news for the gold bulls.

The supply crunch is expected to moderate in the second half of 2022, which would also ease inflationary pressure. To be clear, inflation won’t disappear, but it may reach a peak this year. The combination of improvement on the economy’s supply side, with inflation reaching its peak, and with a more hawkish Fed doesn’t bode well for gold.

SOURCE: Investing.com – Market Overview   (go to source)
AUTHOR: Sunshine Profits
All copyrights for this article, including images, are reserved to the original source and/or creator(s).

E.ON apologises for sending socks to customers to help keep heating costs down

How To Interpret And Profit From A Depreciation Cycle

Global Equities Off To Rough Start In 2022, But There Are Exceptions