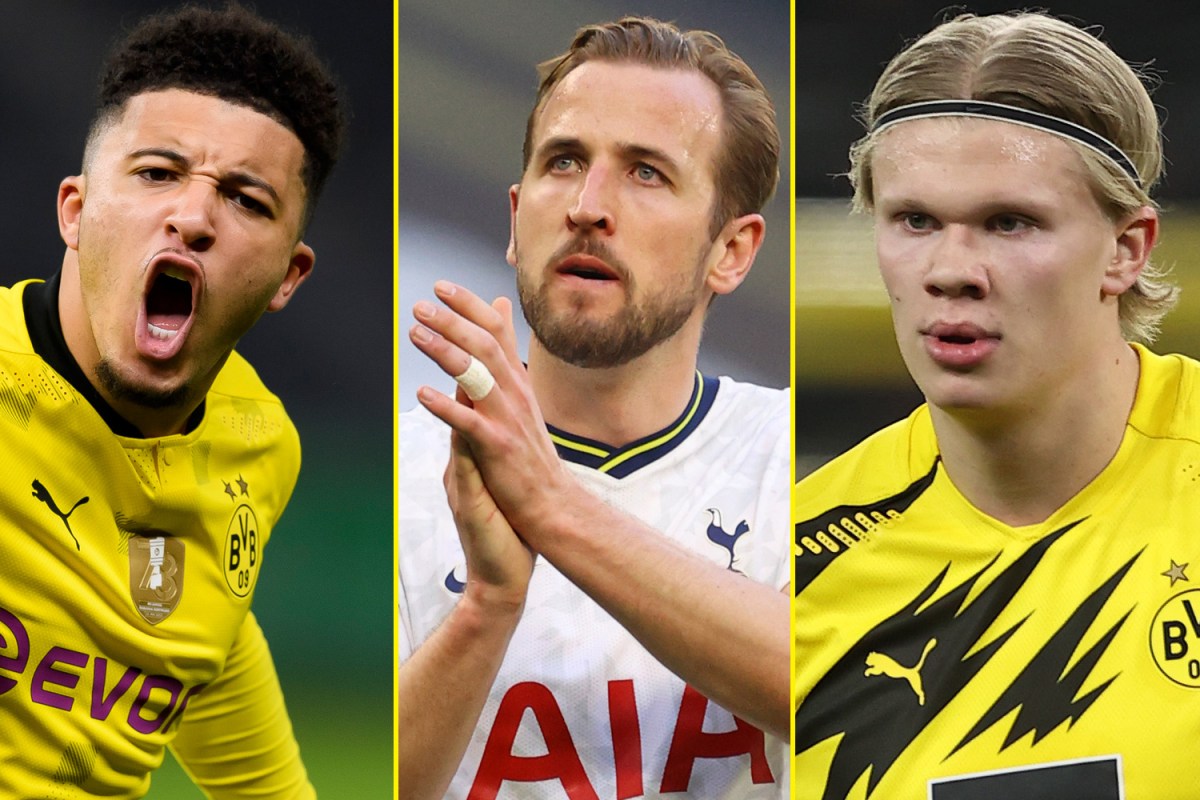 It looks like Jadon Sancho is about to complete his long awaited to move to Manchester United.

An agreement between United and Borussia Dortmund for the forward had been agreed in June, but the transfer was on hold while he played for England at Euro 2020.

Now that’s over, it’s full steam ahead as far as the transfer market goes, with Sancho and a host of other players set for moves.

England’s top-flight gets underway in four weeks’ time with Liverpool, Man City, Chelsea and Manchester United set to be involved in a mouthwatering title race.

And those four big clubs could sign marquee players before the summer transfer window closes on August 31.

So who might be completing big-money moves? talkSPORT looks, beginning with Sancho.

The England winger has been linked with a move to the Red Devils for the past 18 months and looks set to officially complete a £73million transfer any time now.

There are reports Sancho has already completed his medical with the club preparing to announce their signing in the new kit.

It has been claimed Man City made an ‘official proposal’ to Tottenham for Harry Kane, worth at least £100m last month.

Unsurprisingly, Spurs chairman Daniel Levy has no intention of selling his star man.

But things could become ugly if Kane, who is yet to win silverware in his career despite scoring 221 goals at club level, decides to push through a move.

The 27-year-old striker was fully focused on England during Euro 2020, but now that’s over and he has another runners-up medal, Tottenham fans will be sweating on Kane’s future more than ever.

Signing Sancho and Varane would arguably go down as Manchester United’s greatest ever transfer window in the post-Sir Alex Ferguson era.

Varane has just one year on his Real Madrid contract and is said to be keen on a move to Old Trafford if an agreement between the two clubs is reached.

If the Frenchman stays at the Bernabeu, he will be able to sign a pre-contract with an overseas club in January and Real Madrid are likely to avoid the risk of losing the 28-year-old on a free transfer.

It could see United swoop in to sign Varane for a cut-price fee this summer.

Atletico Madrid signed Rodrigo De Paul for £30m from Udinese on Monday, which is seemingly pushing Saul closer to the exit door.

And the midfielder does not appear to be short of options with Liverpool and Barcelona interested in acquiring his services.

The Reds reportedly had a bid of around £30m rejected by Atletico with the LaLiga giants holding out for a £42m fee.

It is understood Jurgen Klopp is looking to bring in a midfielder to replace Georginio Wijnaldum, who let his Anfield contract run down before joining Paris Saint-Germain on a free transfer.

Liverpool have also been linked with Lille star Renato Sanches, who would be a cheaper alternative to Saul.

Anfield legend John Barnes believes Saul would be an ideal signing for his former club.

He told BonusCodeBets.co.uk: “Saul fits the team. He’s a midfield player who works hard, he can be attacking and defensive.

“Gini Wijnaldum’s an attacking midfielder for Holland and scores goals, whereas for Liverpool he didn’t really score goals.

“But he could do both and that’s what we need. I don’t think the way we play would suit someone like Kevin De Bruyne, and you may say De Bruyne is better than Saul.

“But what Klopp does is he has a way of playing and says ‘this is what I want’. Saul is someone who can do it.”

Not only did the manager guide the Blues from eighth to fourth place, he led them to Champions League glory at the end of the campaign.

His short-term success could be rewarded by owner Roman Abramovich in the transfer market – and what better way to do that by landing one of the world’s best strikers?

Haaland, who has scored 40 goals in 43 Bundesliga appearances for Borussia Dortmund, could be the man to fire Chelsea to a sixth Premier League title.

With Timo Werner struggling for confidence in front of goal and Tammy Abraham and Olivier Giroud likely to leave west London this summer, signing a striker seems like a priority for Tuchel.

But Haaland will not come cheap with Dortmund believed to be holding out for a staggering £150m fee.

Arsenal have been heavily linked with a £50m move for White.

The Brighton defender’s Euro 2020 campaign with England is over and he will look to get his future sorted in the forthcoming weeks.

White is also being chased by Man City and Everton, although talkSPORT’s Alex Crook claims the defender ‘isn’t particularly keen’ on joining the Toffees.

Pjanic is surplus to requirements at Barcelona, despite joining the club for £54m from Juventus last summer.

The LaLiga giants are desperate to get the 31-year-old’s wages off their books to ensure they can afford a new contract for Lionel Messi, who is currently a free agent.

Manchester United have been mooted as a destination for Pjanic, however, the midfielder’s previous working relationship with new Tottenham sporting director Fabio Paratici from their Juventus days could work in Spurs’ favour.

SOURCE: Football – news, transfers, fixtures, scores, pictures   (go to source)
AUTHOR:
Jake Bacon
All copyrights for this article, including images, are reserved to the original source and/or creator(s).