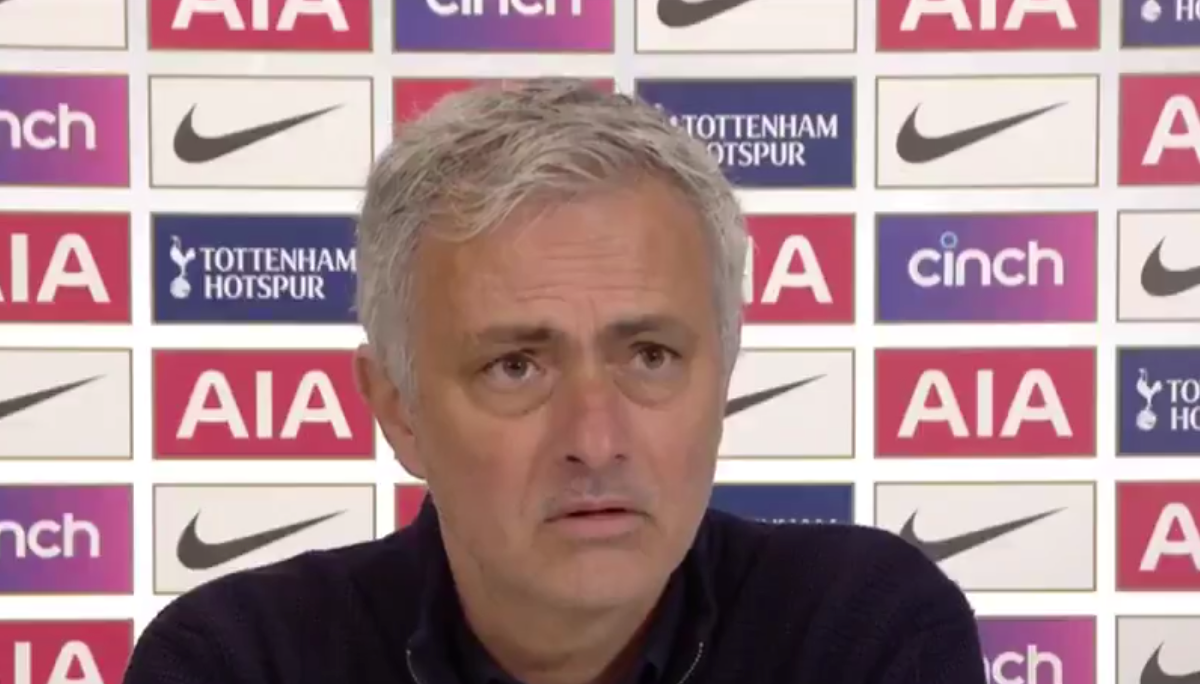 The Spurs boss was left enraged by accusations from Solskjaer that Heung-min Son had ‘conned’ the referee over a controversial first-half incident.

Son went down holding his face after being fended off by Scott McTominay in the build-up to an Edinson Cavani goal, which referee Chris Kavanagh eventually ruled out after a VAR intervention.

Son, who reacted dramatically to the challenge, went on to score the opener before United hit back to take all three points with an excellent second half-display, as Fred, Cavani and Mason Greenwood all netted.

Despite leaving London with an impressive victory, Solskjaer was not happy with the Tottenham forward and made that very clear after the game.

The United manager said: “We shouldn’t be conned. If my son stayed down for three minutes and needed 10 mates to help him up, he wouldn’t get any food.”

Solskjaer’s comments prompted a furious response from Mourinho, who declared Son was ‘very lucky’ to have a father that is a ‘better person’ than the Norwegian – the man who replaced him as Man United boss.

He said in his post-match press conference: “First of all, let me tell you something. I’m very, very surprised that after the comments that Ole made on Sonny, you don’t ask me about it.

“Because – and I told Ole already this because I met him just a few minutes ago – if it’s me, telling that player A, B or C from another club, if it was my son I wouldn’t give him dinner tonight, what would be the reaction of that?

“It’s very, very sad. I think it’s really sad that you don’t ask me about that. It’s sad you don’t have the moral honestly to treat me the same way as you treat others.

“In relation to that, I just want to say that Sonny is very lucky that his father is a better person than Ole. I am a father. I think as a father you have always to feed your kids. Doesn’t matter what they do. If you have to steal to feed your kids, you steal.

“I’m very, very disappointed. As we say in Portugal, bread is bread and cheese is cheese. I told Ole already what I think about his comments and I’m very disappointed that in five, six, seven questions you ignore the dimensions of that comment.”

Mourinho also felt United were lucky not to have Paul Pogba sent off for catching Serge Aurier with an arm, while he conceded his side will now struggle to finish in the top four.

Tottenham are now seventh, six points off West Ham in fourth, after their tenth defeat of the season.

“My opinion it was a good game but we didn’t deserve this result at all,” Mourinho said.

“We were unlucky because maybe Pogba should get a red card for an elbow on Serge Aurier.

“Sometimes you get, sometimes you don’t get, I don’t know how to comment. You don’t celebrate a goal because you are afraid.

“It is difficult for everybody. For us, the players, the referees. Lots of contradictions and decision you don’t understand very well. That’s not my problem, I cannot fix this.

“[Top four?] You look to the table and see the distance to them. You know it’s difficult but it is mathematically possible.”

SOURCE: Football – news, transfers, fixtures, scores, pictures   (go to source)
AUTHOR:
Jake Bacon
All copyrights for this article, including images, are reserved to the original source and/or creator(s).

Man Utd boss Ole Gunnar Solskjaer on Son Heung-min: ‘If that was my son, he doesn’t get food’

Match of the Day: Poor goal 'sums up Sheffield United's season' as…