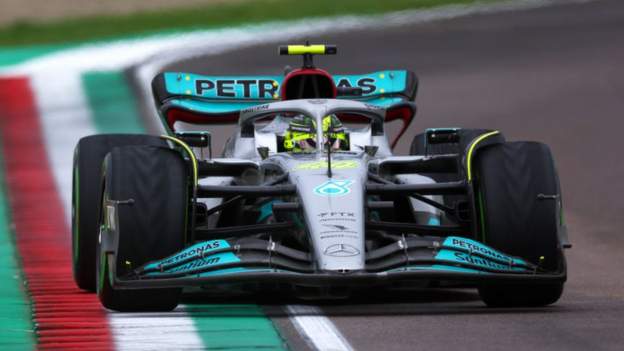 Mercedes are aiming to have upgrades at the next race in Miami that they hope will begin to solve the car problems that have afflicted them this year.

Trackside engineering director Andrew Shovlin said the new parts would “hopefully indicate whether we are moving in the right direction”.

Mercedes, constructors’ champions for the past eight years, have started the season nearly a second off the pace.

Shovlin said the team were “not expecting to solve this overnight”.

Seven-time champion Lewis Hamilton has had a difficult start to the season. The 37-year-old has managed only one podium finish in the four races so far and lies seventh in the championship.

Team-mate George Russell has fared slightly better, and is fourth in the championship, having also scored one podium.

Hamilton has already written off his hopes of winning a record eighth drivers’ title this year.

Mercedes’ biggest problem is a phenomenon known as “porpoising”, where the under-car airflow becomes disrupted and leads to a high-frequency bouncing on the straights.

This is forcing the team to run the car at a higher ride-height than it was designed for, which reduces the overall level of downforce and performance but makes the bouncing just about manageable.

One of the new parts expected at the inaugural race at Miami Gardens from 6-8 May is a lower-drag rear wing.

The hope is that by reducing the aerodynamic load on the car at the rear, the porpoising will not be triggered as easily.

However, other parts will also be needed to fully solve the problem, which a number of engineers outside Mercedes believe is likely caused by flexibility in the floor.

A major difficulty for Mercedes is that porpoising does not show up in either computational fluid dynamics or a wind tunnel, the two tools F1 teams use to simulate aerodynamic behaviour and design and test upgrades.

Shovlin said: “A lot of the work that is going on in [the factory in] Brackley has been to understand the phenomenon and whether we can actually control it, whether we can engineer it out of the car.

“Is there an aerodynamic solution that we can apply to the car that will make this problem go away?

“Now, being realistic we think this will be something we approach in steps rather than one big moment where the whole thing vanishes.

“But we are seeing encouraging signs. As I said, we are hoping to bring parts to the car soon, maybe even Miami where we can hopefully see progress on this issue.”

Starbucks’s Fundamentals Are Stronger Than The Stock Would Suggest

Travis Scott: Rapper set to headline first festival since Astroworld tragedy – with Brazil event a day after anniversary of Houston crush which killed 10 | US News