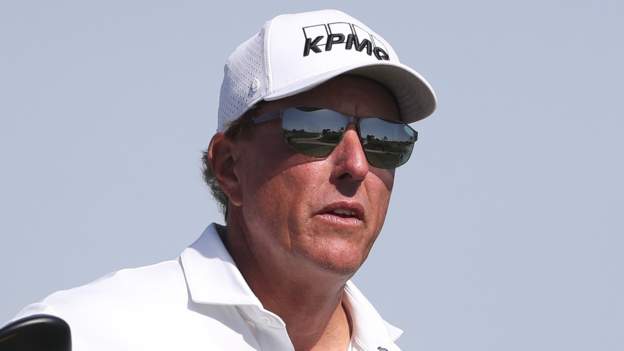 Phil Mickelson is seeking a release from the PGA Tour to play in the first event of Greg Norman’s Saudi-funded LIV Golf Invitational event in June.

The 51-year-old American missed the Masters in April as he took a break from the game after apologising for his criticism of Saudi Arabia’s regime.

“This request complies with the deadline of 25 April set forth by the PGA Tour to compete in a conflicting tour event,” said Steve Loy, the co-president of Mickelson’s management company SportFive.

The LIV Golf International Series is regarded as the first incarnation of the proposed breakaway Super League.

Norman has shelved plans to run the series as a league format, instead each event will run as an invitational tournament until 2024.

The opening event will take place near London at the Centurion Club in Hertfordshire.

Meanwhile, six-time major champion Mickelson, along with compatriot Tiger Woods, has been named in the field for the 2022 US PGA Championship in May.

He won the tournament last year to become the oldest man to win a major title.

“Our client client Phil Mickelson is officially registered to play in the PGA Championship as well as the US Open,” said Loy.

“We have also filed a request on his behalf for a release to play in the first LIV Golf Invitational in London, 9-11 June.

“Phil currently has no concrete plans on when and where he will play. Any actions taken are in no way a reflection of a final decision made, but rather to keep all options open.”

Mickelson faced a backlash for comments he made in November to writer Alan Shipnuck.

Before the publication of his unauthorised biography of the American, Shipnuck released the interview in which Mickelson branded the Saudi regime as “scary” but said the project was a “once in a lifetime opportunity to reshape how the PGA Tour operates”.

Although Mickelson claimed his remarks were taken out of context, he admitted his comments were “reckless” and that he was “deeply sorry for his choice of words”.

Mickelson said he would use his time away from golf “to work on becoming the man I want to be”.

SOURCE: BBC Sport – Golf   (go to source)
AUTHOR:
All copyrights for this article, including images, are reserved to the original source and/or creator(s).

Monkeypox: Four more cases of rare viral infection have been…