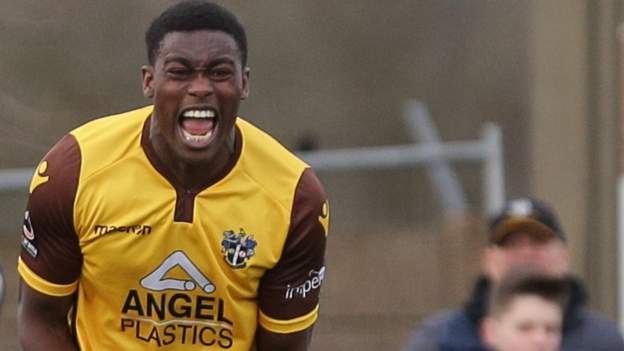 Sutton United brushed aside Hartlepool United to clinch the National League title and ensure they will start next season as an English Football League club for the first time in their 123-year history.

Rob Milsom’s first-half free-kick was fumbled over the line by Pools keeper Brad James to set the U’s on their way in front of more than 1,000 fans at a joyous Gander Green Lane.

And with Sutton increasingly in control, Louis John’s deflected strike from a corner made it 2-0 before top-scorer Isaac Olaofe’s fine individual strike sealed a sixth win in seven games.

Torquay’s United’s 2-2 draw with Barnet on Saturday meant the U’s would be certain of both promotion and the title with a win and they had the better of a lively and fiercely competitive game against fellow promotion contenders.

Pools, who were already guaranteed a play-off spot, could have taken a huge step to finishing third and avoiding a qualification tie.

They can still achieve that feat and earn a home semi-final tie at the same time but now must beat Weymouth and hope Stockport fail to win in the final round of fixtures.

Pools still had title aspirations of their own with six games remaining following a 16-game unbeaten run, but three defeats in four means they may now miss out on third spot.

The visitors made a good fist of spoiling the party in an even first 30 minutes full of chances, but Sutton’s pace, power and more direct approach then wore the visitors down.

The U’s had the first noteworthy attempt when Craig Eastmond rounded keeper James but was unable to get his shot on target from a very tight angle and Omar Bugiel also had a low strike deflected just wide.

In between, Pools were dreadfully unlucky not to lead when Jamie Sterry’s thunderous strike crashed back off the post and keeper Dean Bouzanis made a fine save to push away on-loan Newcastle defender Lewis Cass’s follow-up half-volley.

The hosts also had very strong claims for a penalty ignored when James wiped out Donovan Wilson as the striker looked to get on the end of a flick-on, while Wilson had a strike well blocked by James and a Bugiel header from a corner clipped the top of the bar.

But the goal, when it arrived, was a gift. Milsom’s 25-yard free-kick should have been a regulation save but James made a complete hash of it as he dived to gather and it squirmed in at the near post.

Luke Armstrong did have a goal ruled out for handball after the break, but that was as close as the visitors got.

John almost added a second but his looping header hit the bar with James beaten, while the keeper had to make a stunning reaction save to tip Wilson’s overhead kick over the bar.

But two goals inside the final 17 minutes ensured Sutton moved five points clear of Torquay with just one game to play.

Zaine Francis-Angol (Hartlepool United) is shown the yellow card for a bad foul.

Ryan Johnson (Hartlepool United) is shown the yellow card for a bad foul.

Lineups are announced and players are warming up.

Afghan interpreters who worked with British military land in…