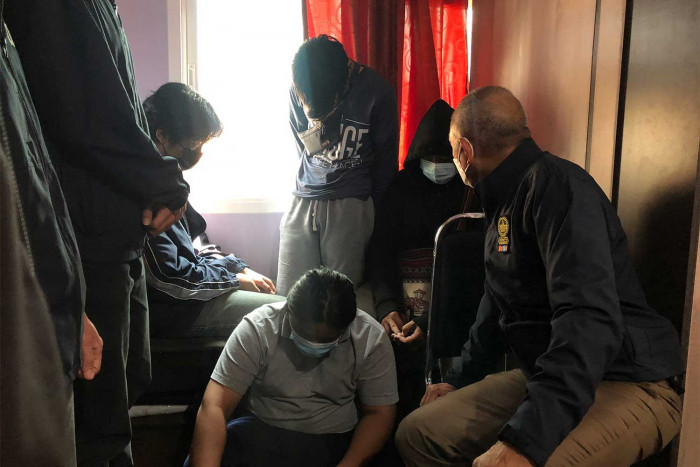 Four men acting as administrators of two gambling websites were arrested when police searched a small house in Lat Phrao district on Tuesday.

Officers from the Metropolitan Police Bureau and Khok Khram police station arrived to search a  knock-down house at Sena Villa housing estate in Jorakhae Bua area of Lat Phrao district around 9.30am on Tuesday.

A sign, CG Production Co, was on the front of the single-storey premises.

Inside. four men were found providing gambling services online. They were taken into custody and six computers used for their gambling operations seized.

Pol Maj Gen Jeeraphat Phumjit, deputy chief of the MPB, said the house was was the office for two gambling websites, Turbo Slot and Slot XO, which had 50,000 members

During questioning, the suspects said they were each paid 10,000 baht a month to be administrators of the gambling websites, which operated around the clock.

Police found the gambling operation had over 20 million baht in circulation during the past seven months.

The suspects were taken to Khok Khram police station for legal action.

SOURCE: Bangkokpost.com : Thailand   (go to source)
AUTHOR:
Wassayos Ngamkham
All copyrights for this article, including images, are reserved to the original source and/or creator(s).

COVID-19: ‘It’s on all of us’ – Matt Hancock warns easing lockdown could be slower than PM’s timeline

Japan COVID-19 inoculations off to snail pace start due to…

Brent Crude Up 2% in Early Asia Trade, Could Boost U.S.…

Meghan and Harry on Oprah: Couple reveal they are having a…