Vuelta a Espana: Simon Yates out with Covid-19 as Kaden Groves wins stage 11 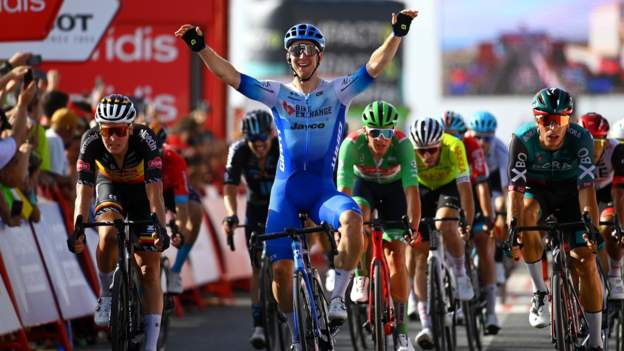 Britain’s Simon Yates, who was one of five riders to withdraw before stage 11 after testing positive for Covid-19, won the Vuelta a Espana in 2018

Australia’s Kaden Groves produced a stunning sprint finish to claim victory on stage 11 of the Vuelta a Espana.

The 23-year-old BikeExchange-Jayco rider perfectly timed his burst after the 191.2km run to Cabo de Gata.

His British team-mate Simon Yates was one of five riders to withdraw after testing positive for Covid-19.

“It feels fantastic [to win]. This morning, with news of Simon Yates testing positive for Covid-19, all the boys were disappointed but this is the best way to bounce back,” said Groves, who is riding in his first Grand Tour.

“I wish he was still here with us, but I am super happy to get my first Grand Tour win.”

Britain’s Fred Wright, 23, riding for Bahrain Victorious, was eighth in the sprint finish, while compatriot Tao Geoghegan Hart, 27, of Ineos Grenadiers, moved up to eighth overall after earlier withdrawals, with no other significant changes to the overall classification.

Yates, 30, was fifth in the general classification before withdrawing on Wednesday morning.

BikeExchange-Jayco said the 2018 Vuelta winner suffered a “light fever and body aches” overnight and was withdrawn “with rider health and wellbeing our priority”.

Pavel Sivakov, of Ineos Grenadiers, who was running ninth overall, also withdrew, along with three riders from the Kern Pharma team – Spain’s Roger Adria, Hector Carretero and Pau Miquel Delgado. Britain’s Ethan Hayter was one of five riders to withdraw with Covid-19 on Tuesday.

France’s Alaphilippe, 30, who won the world title in 2020 and 2021, was taken to hospital for tests and his Quick-Step team later confirmed he had suffered a dislocated right shoulder, but X-rays showed there was no fracture.

“Julian will travel to Belgium on Thursday, where he will undergo an extra scan at the hospital in Herentals, in order to rule out any further damage. At this point, no timescale has been set for his recovery,” the team added.

Alaphilippe was due to defend his rainbow jersey at this year’s event in Wollongong, Australia, on 25 September.

The Frenchman flew over his own handlebars after crashing into one of his team-mates, who fell in front of him with less than 70 kilometres to go on the 191.2km run along the windy Andalusian coast to Cabo de Gata.

His retirement will be a blow to the chances of race leader Evenepoel, 22, from Belgium, who retained his two minutes and 41 seconds advantage over Slovenia’s Primoz Roglic after stage 11’s blanket finish.

Cameron Smith: Open champion says it would be unfair if LIV Golf players are not allowed to play majors

Not over yet – Il Lombardia, WorldTour survival and long goodbyes all part of…

Pöstlberger moves to BikeExchange from Bora-Hansgrohe

Sony Linkbuds review: is a half-step the right idea?

Anthony Gordon says he was ‘never desperate to leave…